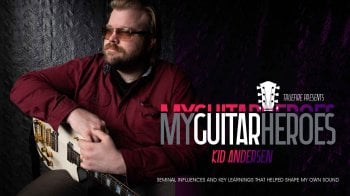 Learn Signature Techniques of Blues Guitar Legends
Every musician has a long list of other musicians, past and present, that have inspired, influenced and helped shape their own sound and musicality. It’s the natural evolution of music. We asked Kid Andersen to pass on to you some of the key learnings that his Guitar Heroes passed on to him.

”Freddie King, Buddy Guy, Chuck Berry, Peter Green, Junior Watson and Otis Rush have all greatly influenced my own sound as I’m sure they’ve influenced many other players. In this course, I’ll show you a few of the techniques and approaches that I picked up from each one of them.

We’ll look at Freddie King, a giant of a man who applied his brute strength to coax maximum emotion out of his guitar lines. Buddy Guy, a true master of micro tones and macro dynamics. Chuck Berry is a well established pillar of rock and roll guitar, but he had much more bubbling under the surface.

We’ll take a look at Peter Green, whose unique tone and harrowing intensity made even the masters give it up for him. My friend, Junior Watson, whose left field, oddball, quirky style has spawned legions of imitators all over the world. And in the final study, we’ll look at Otis Rush, who to me and many others, represents the Mount Everest of blues guitar intensity!”

In this course, Kid will first introduce his heroes to you and describe why he found them so influential. After each discussion, Kid will then present a performance study illustrating those influences in a musical context, over a backing track. A breakdown follows every performance and Kid will explain and demonstrate all of the key concepts and approaches in play.

You’ll get standard notation and tabs for all of the performance studies. Plus, you’ll be able to use TrueFire’s learning tools to sync the tab and notation to the video lesson. You can also loop or slow down the videos so that you can work with the lessons at your own pace. All of the backing tracks are included to work with on your own as well.

Grab your guitar and let’s dig in with Kid Andersen!