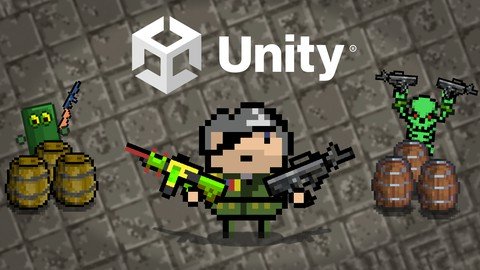 What you’ll learn
Unity 2D Game Development to create a 2D Dungeon Shooter Roguelike game like ‘Enter The Gungeon’ or ‘The Binding Of Isaac’.
Intermediate level course will show you how to build a sophisticated game by creating complex Unity components using C# scripting.
How to build a fully featured, complete game – not just a tech demo.
160+ in depth lectures with over 50 hours of detailed video supported by a full completed project with save points after every lecture.
How to build a dungeon room node editor tool to create node graphs of dungeon room layouts for dungeon levels.
Implement game cameras using Cinemachine and Pixel Perfect components.
How to use layers and sorting layers in a 2D game, and create dungeon room templates using tilemap layers.
Create entire randomized game levels using a dungeon builder algorithm that combines dungeon level node graphs and dungeon room templates.
Create multiple player characters using prefabs, animator controllers and animations.
Implement player movement and weapon aiming, including dodge roll manoeuvres.
Doors which open for the player and lock the player into dungeon rooms while battling enemies.
Dungeon lighting that fades in as dungeon rooms are explored.
How to create object pools and use them in the game to improve game performance.
How to implement multiple weapon and ammo types which are configurable using scriptable objects.
How to implement sound effects in the game using audio sources, audio listeners, and audio mixers.
How to create a Minimap in the game UI to show a zoomed out view of the player and surrounding dungeon rooms.
How to create special effects using particle systems and implement them for weapon shooting and ammo hit effects.
Create multiple enemy types and bosses that you will encounter across the multiple dungeon levels.
Use hidden tilemaps to store grid properties, such as preferred paths for enemies.
Understand how AStar pathfinding works by using algorithms and create an AStar pathfinding system for the game enemies.
Learn how to spawn enemies in dungeon rooms in a configurable and random way using materialize effects.
Implement weapons and ammo for enemies, including ammo patterns and enemy weapon firing AI.
Create health and damage systems for ammo damage and contact damage.
Learn how to implement play across multiple dungeon levels with boss battles, and high scores with accuracy multipliers.
Create items to decorate the dungeon rooms that can take damage and be destroyed.
Learn how to implement tables that can be flipped to provide cover for the player.
Implement Dungeon Chests that the player can loot, that can contain health, ammo and weapons.
Implement a dungeon overview map that the player can use to navigate to rooms they’ve already visited.
Learn how to implement music in the game which is configurable for each dungeon room to play both ambient music and battle music.
Add a Pause Menu to adjust the music and sound effect volume levels, and save the set levels using Player Preferences.
Create a Main Menu for the game with a character selector, high scores table, and game play instructions.

Requirements
This isn’t a beginner course! You should have Intermediate Unity Development Skills – and built a few Unity prototypes or games before.
Good knowledge of the Unity editor, and how to use it’s main features.
Good knowledge of C# scripting and the fundamentals of object oriented programming.
Good knowledge and understanding of some of the main Unity API classes and C# system classes.
The willingness to look up anything you are not familiar with in the Unity scripting manual or C# resources online.
Install the free Unity 3D game engine software and Visual Studio Community Edition.
Install the free SourceTree git client to help follow along with the provided completed Unity project and the branches that correspond to completed lectures.
Description
Have you ever wanted to build a 2D Roguelike game using the Unity game engine like ‘Enter The Gungeon’ or ‘The Binding of Isaac’?

Well with this course you can!

The course and underlying project have taken several thousand hours to develop, but all that knowledge will be transferred to you step by step, lecture by lecture. The course is massive with over 50 hours of detailed video tutorials spread over more than 160 lectures. This has to be one of the most complete and sophisticated Unity 2D development courses available.

We’ll take you through every line of code and every configuration step, from a blank Unity project to a fully functional and complete game. The game is built in a modular and expandable way, and uses best practice coding techniques like events to decouple the interdependencies in the code. The project has been built under GIT source control, so you can easily load the supplied completed course at a save point for every lecture.

The game is sophisticated, and goes far beyond what most Unity courses will ever attempt to teach you. The course covers

A range of weapons and ammunition types

This is just a selection of what you’ll learn, and all the assets you’ll need to complete the course and produce a fully functional and polished game are included. The concepts you’ll learn will help you create your own game that you can tailor to match your game development vision.

So why not join me in this course, and build your own Dungeon Gunner 2D Roguelike in Unity. I really hope you do, and I look forward to seeing you in the course.

Who this course is for
Intermediate Unity Developers who want to extend their skills and knowledge using a full project based course.
Existing Unity developers who are fans of Enter The Gungeon or The Binding Of Issac and want to build their own 2D Roguelike dungeon shooter.
A Unity developer who has previously built some prototypes or games and wants a challenging project course to level up their skills.