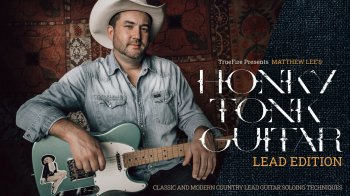 Classic and Modern Country Lead Guitar Soloing Techniques
If you’re holding down the lead guitar role in a country-western band, you’ll need command of a wide variety of classic and modern country soloing techniques, across the full spectrum of country and honky tonk grooves and feels. Mathew Lee’s Lead Edition of Honky Tonk Guitar will deliver all of the fretboard goods you’ll need to perform at the highest level.

Matthew has been one of the hottest guitarists on the Nashville scene for a decade now, and has been able to make a living from his unique style, as well as move up the ranks of guitar players in one of the most popular music cities in the world.

Not only a phenom guitarist, Mathew is also a passionate and very talented educator. His TrueFire artist channel is very popular and we’re thrilled to now officially welcome Mathew to the family with his first TrueFire course, Honky Tonk Guitar: Lead Edition!

“I play a minimum of 200 gigs a year supporting recording artists and established bands performing everywhere from Nashville honky-tonks to venues and concert halls in virtually every state. In this course, we’ll focus on soloing techniques for the most commonly encountered country-western feels including country shuffles, train beats, outlaw grooves, country rock, straight minor feels, and Americana.”

Mathew will explain and demonstrate all of the key concepts and approaches along the way. You’ll get standard notation and tabs for all of the performance studies. Plus, you’ll be able to use TrueFire’s learning tools to sync the tab and notation to the video lesson. You can also loop or slow down the videos so that you can work with the lessons at your own pace. All of the backing tracks are included to work with on your own as well.

Grab your guitar and hit the honky-tonks with Mathew Lee!